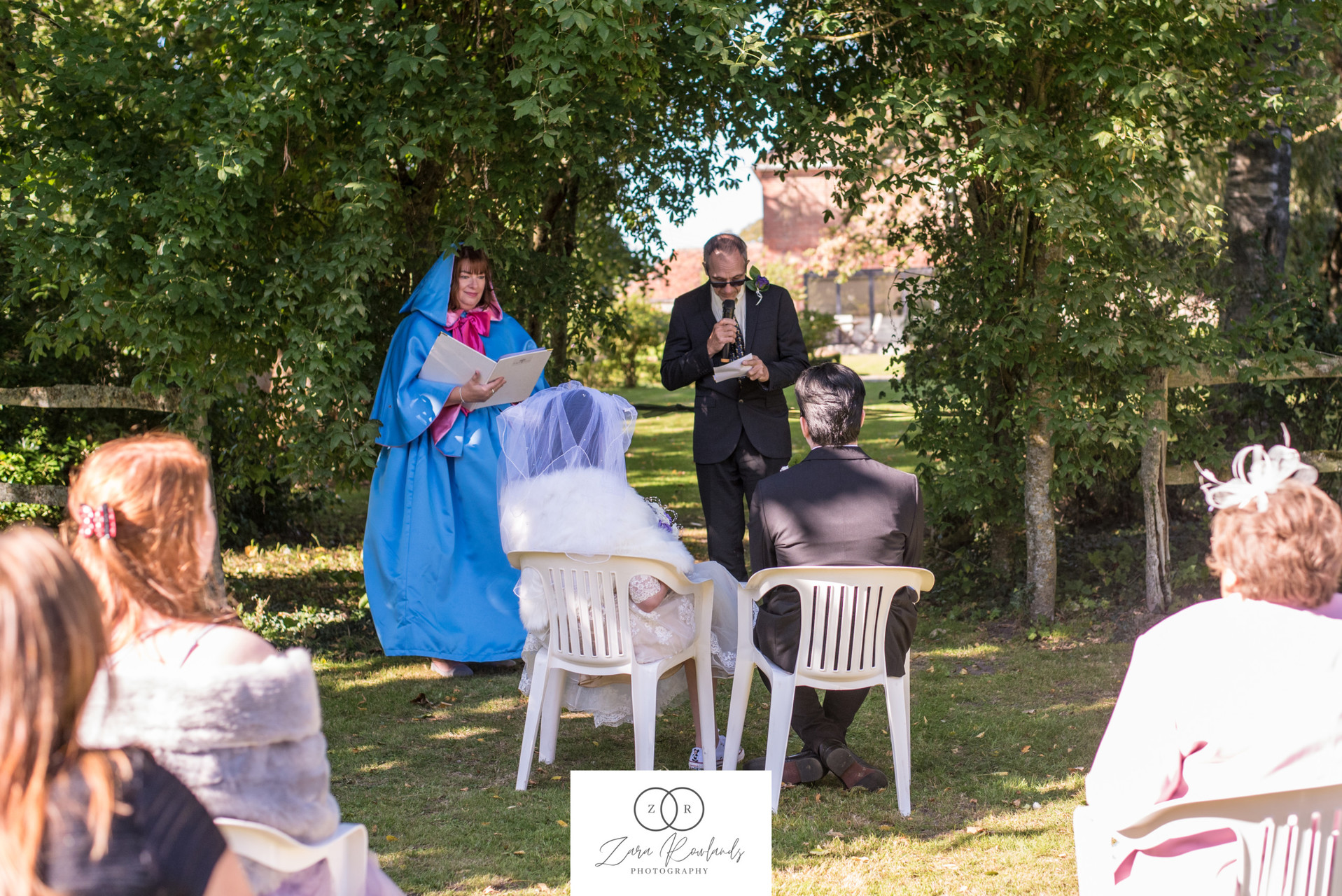 Themed weddings are becoming more and more popular with couples. Disney is a huge part of many people’s childhood memories, one that makes a perfect theme for their wedding day. Themed weddings can be so much fun to plan. By having a celebrant-led ceremony you can really bring to life your theme from start to finish!

When Diane Bell received an enquiry about a real life Disney themed wedding, she was a bit excited to say the least. Here, she talks to The Celebrant Directory about Becky & Charlie’s themed celebrant-led ceremony.

So why plan a Disney themed wedding?

I just love dressing up so when, after a chat on the phone with the bride to be, I was booked to officiate the ceremony. I chatted with Becky to find out her ideas for the day. Ever since Becky was young, she had dreamt of a Disney wedding. She loves all things Disney and visits Disneyland as much as she can.

She had met her prince charming, Charlie on an internet dating site, and after a long distance relationship, he moved to Chippenham to be with her and they moved into a house together.

Charlie proposed to Becky whilst on one of their trips to Disneyland, in the company of the much loved Pluto, Becky quickly agreed. She was presented with a Beauty and the Beast style engagement ring.

The couple chose the Rustic, Rye Hill Barn near Warminster for their special day. Rye Hill Barn is a beautifully relaxed wedding venue set in the grounds of a 400 acre working farm set amongst the rolling Wiltshire downs in an area of outstanding natural beauty.

Becky’s dream was to get married outside, in the Farms Orchard and then have their reception in the 100 foot long 18th Century oak beamed Barn. Luckily (apart from being a bit breezy), the weather was on our side and the ceremony took place in the orchard.

Plans for the wedding started and Becky’s wedding book, that she had written ideas, quotes and pictures for many years, started to come true.

It was her dream to be married by her fairy godmother, so I embarked on a search for a fabulous outfit. My search took me to Etsy and to a shop in America specialising in Fairy Godmother outfits. An outfit was ordered and I prepared by watching lots of Disney films to get into character, especially Cinderella!

A few months before their big day, I met with Becky and Charlie to discuss the content of the ceremony. The music selected was the instrumental versions of ‘Can you feel the love tonight’ from the Lion King as entrance music for the bride. ‘I see the light’ from Tangled played while the couple signed their certificate and ‘You’ve got a friend in me’ from Toy Story as the couple left the ceremony area.

Readings from Winnie the Pooh and Enchanted were to be read by family and friends along with a reading called ‘From Beginning to End’ read by Becky’s mum, Sandy.

Pre-pandemic plans were coming on nicely but during the preparations, Covid struck and wedding regulations were all over the place. The couple decided that they could cut their guest numbers to 30 and we would still go ahead.

A few days before the wedding it was announced that wedding numbers were to be cut to 15. This was devastating news for the young couple, but they thought of a plan to beat the new rules.

The wedding was able to be brought forward a week so they would still be able to have 30 guests as the new regulation came in the following Monday. Frantic phone calls to all suppliers were made and luckily everyone could make the new date.

On Saturday 26th September, everyone headed to the wonderful venue and the magical wedding took place in the orchard.

The bride wore a vintage style dress and her 4 bridesmaids were in lilac with Minnie Mouse bows in their hair. Becky had bespoke converse style trainers adorned Micky and Minnie Mouse, the wedding date and her new married name, Mrs Tucker. The groom and best man wore Disney ties and Superhero t-shirts under their formal shirts, which were revealed after the ceremony.

The ceremony was in story book style with many of Becky’s favourite Disney quotes peppered through it and the end toast was with a drink sprinkled with fairy dust.

The reception took place in the barn itself and the couples favourite food of pizza was served before an evening buffet. They also had a chocolate fountain, ice cream bar, a magic mirror photo booth and sparklers later in the evening. Becky’s sister Sarah even wrote and performed a Disney inspired song for the happy couple which she performed during the evening. 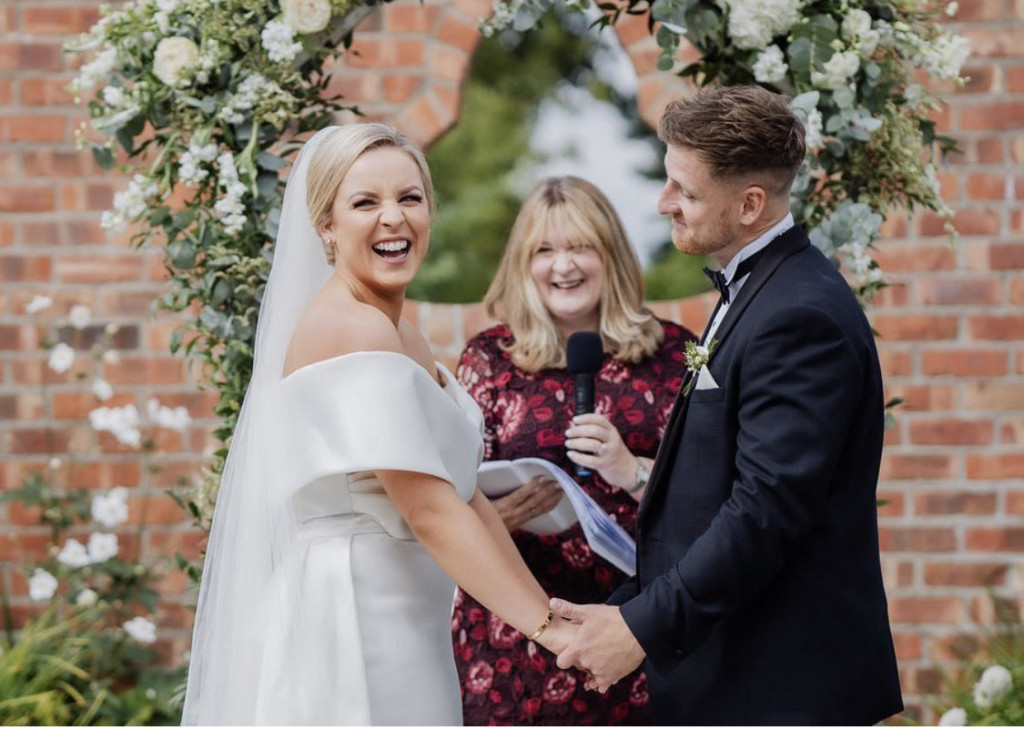 The way your wedding ceremony is performed and styled says a lot about you as a partnership. When planning to walk down the aisle, there’s no need to follow tradition....
Read more >

Eco wedding ideas are trending these days, and with good reason. As humanity moves towards a more earth-friendly way of celebrating special moments, there are many ideas to consider when...
Read more >

For 27 years, one of our members, Patricia worked as a florist, specialising in wedding flowers. She knows a thing or two about jazzing up your big day with flowers....
Read more >