Can we have a Wedding Ceremony outside?

Can we have a Wedding Ceremony outside?

What should I look for when choosing a wedding Celebrant?

What should I look for when choosing a wedding Celebrant?

Can we meet wedding Celebrants before deciding?

Can we meet wedding Celebrants before deciding?

How do I become a wedding Celebrant?

How do I become a wedding Celebrant?

Can we involve our guests in the ceremony?

Can we involve our guests in the ceremony?

What is the difference between a Humanist and a Celebrant?

What is the difference between a Humanist and a Celebrant?

Why would I choose a wedding Celebrant over a Registrar?

Why would I choose a wedding Celebrant over a Registrar?

We married abroad but would like a ceremony in my home town, can this be done?

We married abroad but would like a ceremony in my home town, can this be done?

What happens during a Celebrant led wedding?

What happens during a Celebrant led wedding?

What is a Wedding Celebrant?

What is a Wedding Celebrant?

The Ultimate Guide to Handfasting

The Ultimate Guide to Handfasting

Getting married in Greece: The ultimate guide to a Greek destination wedding

Getting married in Greece: The ultimate guide to a Greek destination wedding

Getting married in The Middle East: The ultimate guide to a UAE destination wedding

Getting married in The Middle East: The ultimate guide to a UAE destination wedding

Getting Married in Edinburgh: Tips for getting married in Scotland’s capital city

Getting Married in Edinburgh: Tips for getting married in Scotland’s capital city

Everything you need to know about a Montenegro destination wedding

Everything you need to know about a Montenegro destination wedding

So you want to get married in Spain?  Congratulations! Who wouldn’t? With its stunning scenery, beautiful beaches, incredible climate and rustic charm, Spain is a highly sought after destination wedding location.

As with planning any wedding abroad, there are some things that you might need to do differently. In this blog The Celebrant Directory member Debbie Skyrme shares with us her top tips to getting married in Spain in this Ultimate Destination Guide. Debbie is a bilingual Celebrant and resides in Spain so what she doesn’t know about Spanish Weddings isn’t worth knowing! 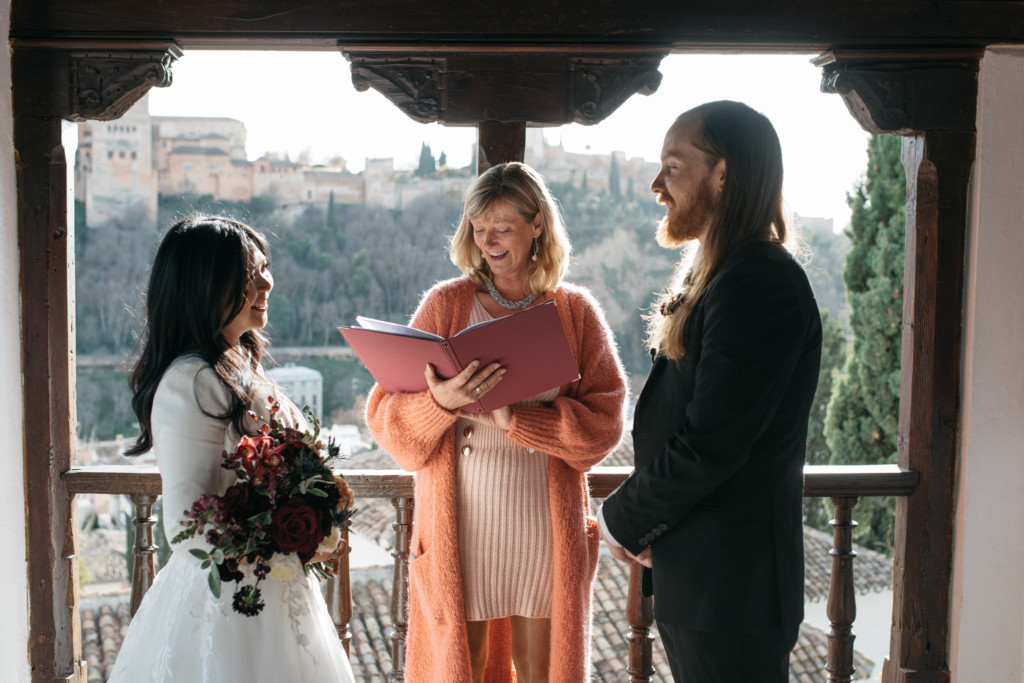 Getting married in Spain – what do I need?

“Unless you are marrying a Spanish national or have lived in Spain for the required period, applying for a legal civil marriage is probably not on the cards.

Top tip is to separate your marriage from your wedding and contract your legal marriage in your home country before travelling to Spain. You can then enjoy your wedding ceremony in the Spanish sunshine totally stress free!

Another option enjoyed by many couples is to contract your marriage in the British Overseas Territory of Gibraltar, then literally cross the airport runway into mainland Spain.

Planning a destination wedding in Spain

The majority of couples planning a destination wedding in Spain choose a professional wedding planner to offer them a selection of venues and wedding suppliers within their budget.

Your wedding planner can speak the local language, negotiate the best possible prices for you and will always be working for you the couple – rather than the event coordinator at one specific venue, who actually works for the venue, not the couple!

Top tip: ask two or three wedding planners for a free consultation. Any wedding planner worth their salt will be delighted to let you follow up on their reviews and speak to couples who have been delighted with their service. Marian at Your Wedding in Spain is a great starting point.

Your guests are making a financial and emotional investment to attend your destination wedding in Spain. It is really important that they not only enjoy themselves but that they feel like they have been to a special wedding and you all leave with meaningful memories to last a lifetime.

Having a Celebrant-led wedding in Spain means that you can have the best of all worlds combining the traditional wording that your guests will be subliminally listening out for but totally personalised with elements to reflect your personalities.

Getting married in Spain

Let’s be frank here, chances are you will contract your legal marriage in your own country and have the ceremonial wedding celebration in the Spanish sunshine with a Celebrant, but there are some important things to consider:

Northern Spain has far cooler temperatures and higher rainfall than in the south which at its nearest point is only 14 km from Africa. Central Spain in Cordoba is known as the frying pan of Spain with shade temperatures regularly exceeding 40 degrees. Southern Spain boasts the sunniest climate and yet here you will also find the longest ski season in Europe in Granada’s Sierra Nevada. You really can ski in the morning and sunbathe on the beach in the afternoon!

The micro climate of Granada’s Costa Tropical in southern Spain offers 320 days of sunshine a year meaning that year round weddings are possible (great for couple’s wanting a wedding out of season).

If you are having a summer wedding, think shade. Your guests will be uncomfortable at best in full sun and at worst they will burn or suffer heat stroke! Either schedule your ceremony for after 5pm or make sure you provide fans, parasols, sun hats and lots of bottled drinking water for use during your ceremony. 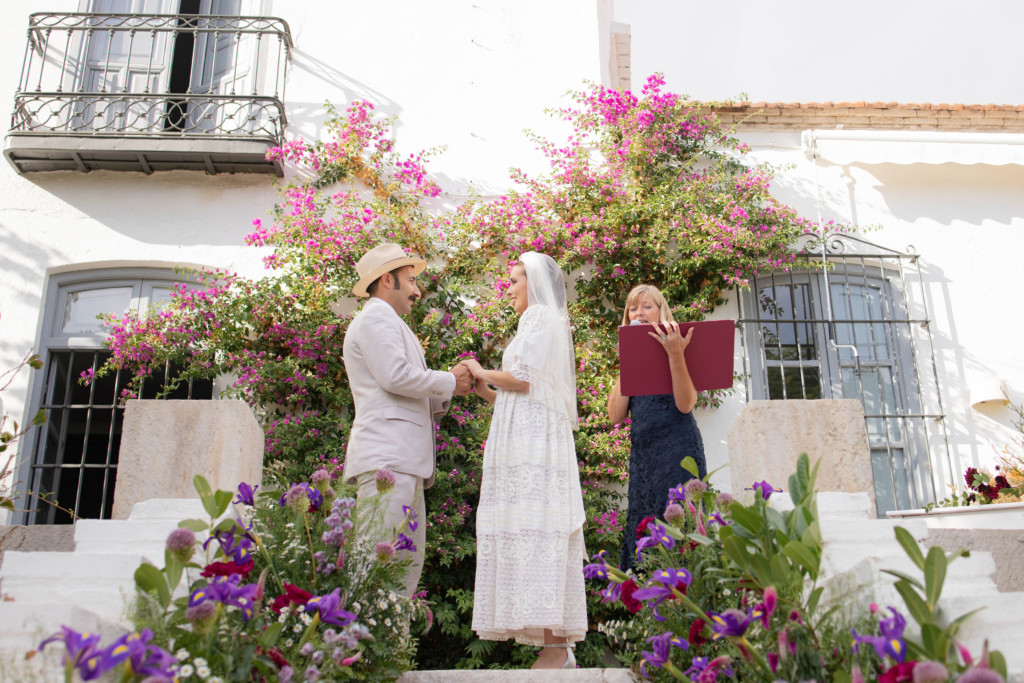 Where to get married in Spain?

Spain as a country is four times the size of the UK with the north of Spain being wildly different to the south. It is a diverse country of beaches, deserts, mountains, vast plains, modern cities and ancient Moorish architecture.

Majorca is famed for its laid back vibe and year-round temperate climate. The capital, Palma, is home to massive Santa Maria cathedral and is a bustling city popular with couples seeking a stylish vibe for their destination wedding. Magaluf and Palma Nova are popular beach wedding destinations.

Cordoba province is one of the most beautiful in central Spain. Two hours inland, the pretty floral patios of Cordoba city itself have UNESCO World Heritage status and offer an elopement or vow renewal ceremony opportunity around almost every corner! Central to the city is the Mezquita – the most incredible mosque with a cathedral inside!

The province of Granada is the ideal “weddingmoon” destination where you really can have a sunny beach ceremony in the morning and be throwing snowballs in the afternoon. Granada’s coast, the Costa Tropical, is a micro climate boasting 320 days of sunshine a year, whilst the Sierra Nevada has the longest ski season in Europe. The capital city, also called Granada is home to the Nazrid palaces with the famous Alhambra perfect for elopements and vow renewal ceremonies.

The province of Jaen is the largest olive producing area in the world with many ancient olive mills beautifully converted into wedding venues. A rugged and under developed province dotted with small whitewashed villages, the capital city, also called Jaen, is dominated by its castle.

The coast of Malaga province is the Costa del Sol. This most visited stretch of Andalucia borders Gibraltar and takes in the party towns of Estepona and Marbella in the west along 150km of the southern Iberian peninsula to Nerja in the East – which attracts a lot of Irish weddings. Malaga city is the capital of the province and is a cultural mecca often overlooked by visitors flying into the international airport and heading straight for the beaches.

Getting married in Spain after Brexit

Destination wedding couples travel from all over the world to have their ceremony in Spain so this advice only affects wedding parties travelling from the UK.

Essentially make sure that:

Documents required for getting married in Spain

Unless you qualify for a legal civil ceremony in Spain there are no documents required to have a celebrant-led wedding in Spain.

Top tip: There are 17 autonomous communities in Spain – so even if you are offered a “religious wedding” do check that the officiating religious minister has the authority to register a legal marriage otherwise you may find it is only a symbolic ceremony.

The impact of Covid on Weddings in Spain

Throughout Spain’s State of Alarm, weddings have continued with restrictions enforced by each of the 17 autonomous communities. What does that actually mean? Well, marriages have been contracted and socially distanced weddings have been celebrated throughout the COVID-19 pandemic with surprisingly fewer restrictions with regards to numbers than in the UK for example.

But what couples really want to know is – what will weddings be like in Spain post COVID.

The answer is that will obviously change as the pandemic eases but suffice to say that wedding suppliers in Spain are a tight community who work really well together and will go out of their way to make sure you have the ceremony of your dreams.

Spain offers an incredible variety of locations to have your ceremony. 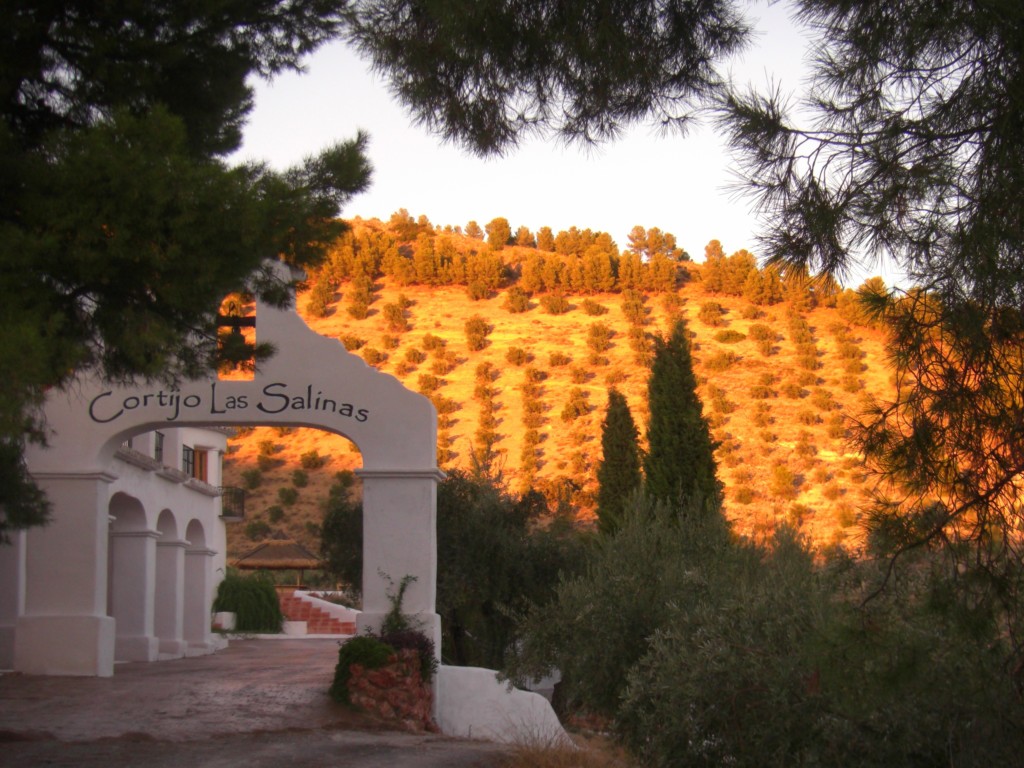 This video of a rustic Spanish cortijo in the centre of Spain’s olive growing region in Jaen with olive groves as far as the eye can see was a real boho wedding at an exclusive yoga retreat called Las Salinas.

This styled wedding takes the couple through the whitewashed village of Salobrena up to a Moorish watchtower high above the Mediterranean for their celebrant-led elopement ceremony.

A real handfasting ceremony in Spanish and in English for this antipodean couple who travelled all the way to historic Granada for their elopement ceremony at a romantic patio overlooking the Alhambra Palace.

The Marbella hills are the Hollywood of Spain and this styled villa wedding included a celebrant-led “hilo rojo” ceremony symbolizing the red thread of destiny ritual. 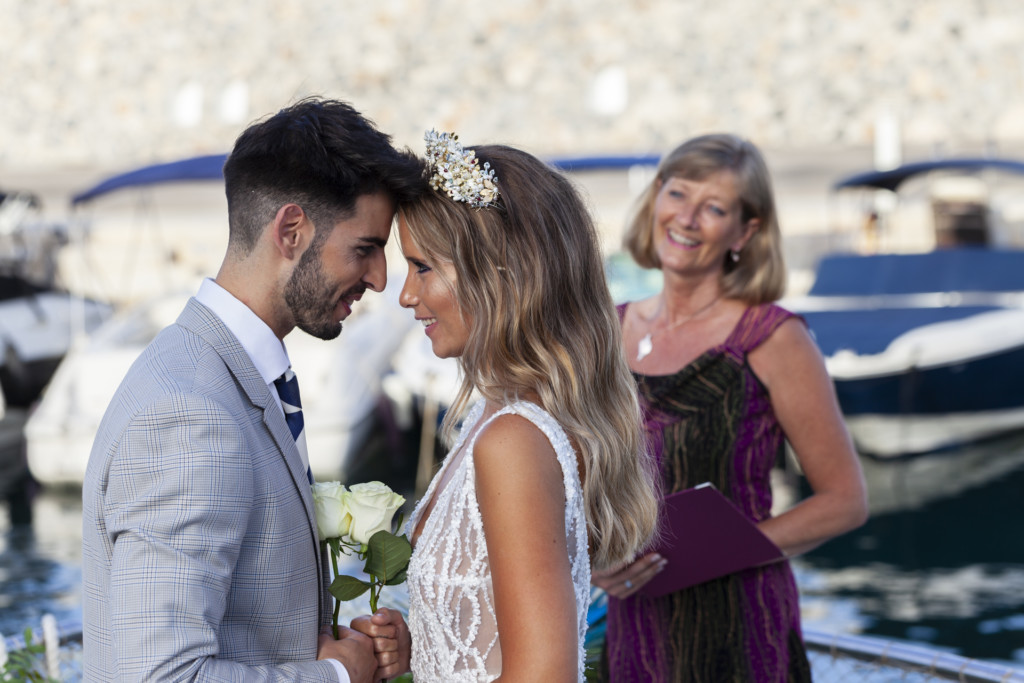 Debbie’s favourite places to get married in Spain

I average forty wedding ceremonies a year in Spain everywhere from palaces and castles to beaches and clifftops.

Perched on the highest point, the luxury La Cresta has 360 degree views of the marina and the mountains and the ceremony space is quite literally breathtaking. Only to book through bilingual wedding planner Tatiana at Llevenes Events

The most romantic rustic cortijo wedding venue I can recommend is La Casa Grande de Zuhaira two hours inland. This is beautiful boutique farmhouse offers all of the magic of real Spain yet only 30 minutes from Granada airport and the historic city.”

The Celebrant Directory is home to Celebrants all across the world. Find your ideal Spanish Celebrant here, or UK Celebrant who is able to travel, to deliver a Celebrant-Led ceremony of dreams!